Thank You : A Postmortem 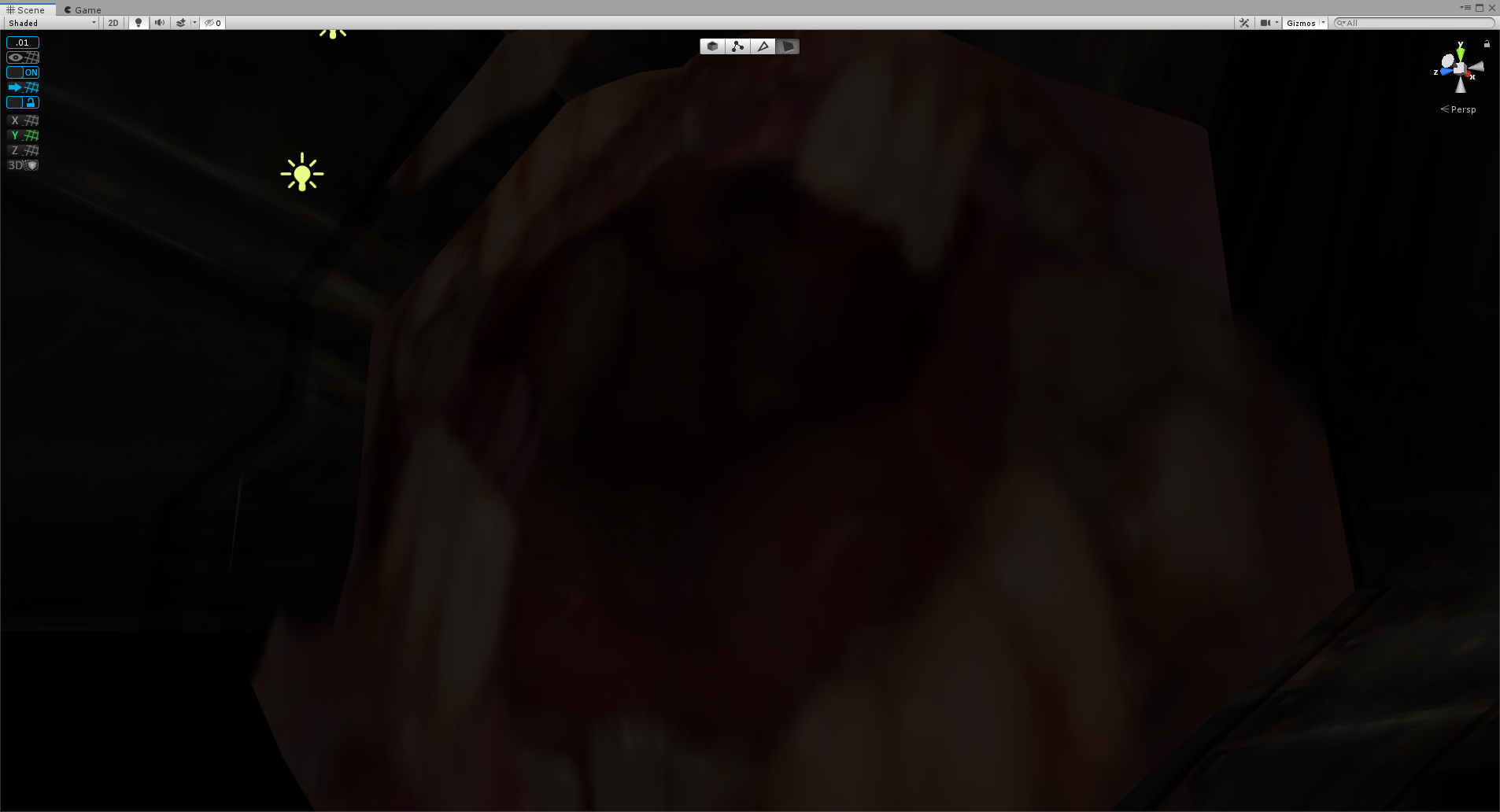 As much as my previous project \SPEK.TAKL\ initially left me dissatisfied (as documented in its own postmortem), Please (stylized in all lowercase 'please') was au contraire published with confidence. A bold confidence I haven't felt in a long while. It is a game in which I had complete control and understanding of the tools I chose to use, the ideas I wanted to communicate, and the means to deliver the experience I desired. I am unsure this will ever happen again (I am quite the anxious game designer after all), so let's take the time to capture the feeling in this postmortem. 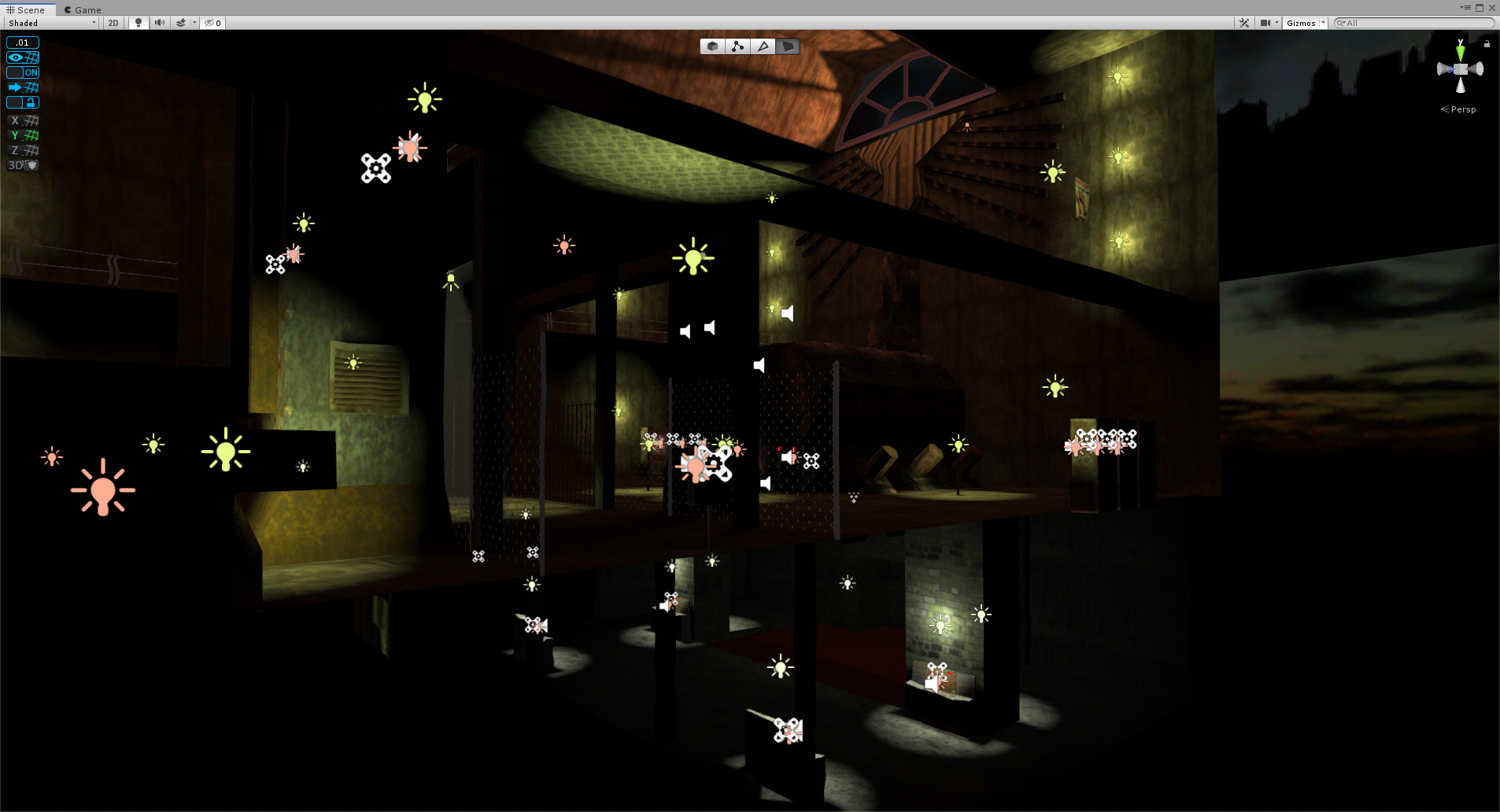 A sideway view of the power station

Grateful for the community

Let's be candid, I was always a little jealous of all the cool kids doing that retro-32bit-aesthetic indie horror game thing. Creators I admire often got together to participate in game jams that generated awesome games, and I kinda wished I was like that. Those creators should be obvious to anyone following the indie horror scene closely (people like Puppet Combo, Modus Interactive, Dan Sanderson et al.). So I put on my big boy pants and joined the latest game jam from the Haunted PS1 pedigree (of which past game jams gave us awesome gems like Homage of the Dead and SirenHead, among others), the Haunted PS1 Summer Spooks.

It also coincided with me joining Twitter. Much like with every other social media platform I joined before, the prospect of setting up an account was intimidating and made me a little grumpy.  I was honestly scared of 'playing the Twitter game', the rules of which are still mostly unknown to me. Defying my personal expectations, I found a community of loving content creators and enthusiastic fans. I love each and everyone of you, but I hope you'll forgive me for saying I'd rather just do my thing, work on my games and have them magically becoming successes without me ever having to interact with anybody. It's just how I work. I've grown into quite the hermit over the last few years, even in my own private life, but Twitter is forcing me to engage in one form of outside reality. Which is actually a good thing. 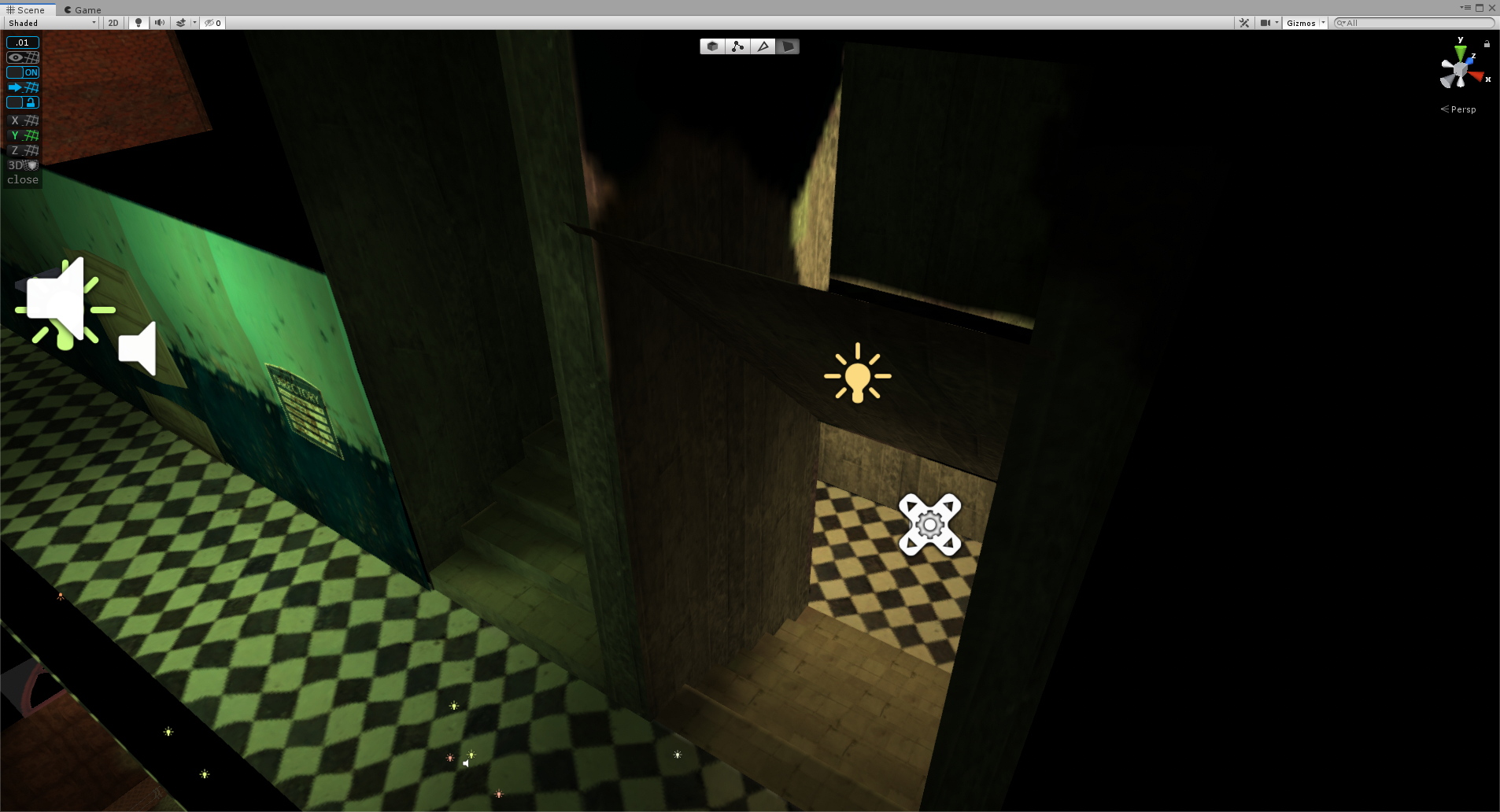 I swear, this staircase leads to nowhere!

Grateful for the tools

please was made using the same tools I always have in my arsenal : Unity and ProBuilder for 3D modeling and handling, and GameFlow for visual scripting. What was different this time, is that I didn't use any other asset to help with the interactions or gameplay mechanics. Admittedly, please is a very simple game, it doesn't do much in terms of mechanics. But everything it does, I made myself from top to bottom, short of actually coding the thing.

This fills me with a certain amount of confidence. Because this time around, everything that happens in the game is fully controlled, measured, as designed. Keeping the game as simple as possible to keep the scope small, it made every of my intentions not only reachable, but exceedable as well. I doubt very much I'll be able to exert this much control again, since my future game ideas are getting more involved and more complex, and I'll need help down the line.

During production, it became obvious that sound was the main component of the experience of please. While some creators take to heart the idea of having a faithful reproduction of 32-bit video games, including some highly-compressed, slightly bit-crushed sound bites, I can't bring myself to deliver anything other than the clearest audio possible. In that way, I'll never achieve true 32-bit era authenticity.

So I used a mix of sources for audio sample (ranging from personal favorite website Zapsplat and various Youtube sound effect channels) and personal recordings made at home with my old Zoom H2 field recorder. You can actually hear my voice in the game, although way warped and drowned out, as I provided the voice of the main power machine in the factory environment. 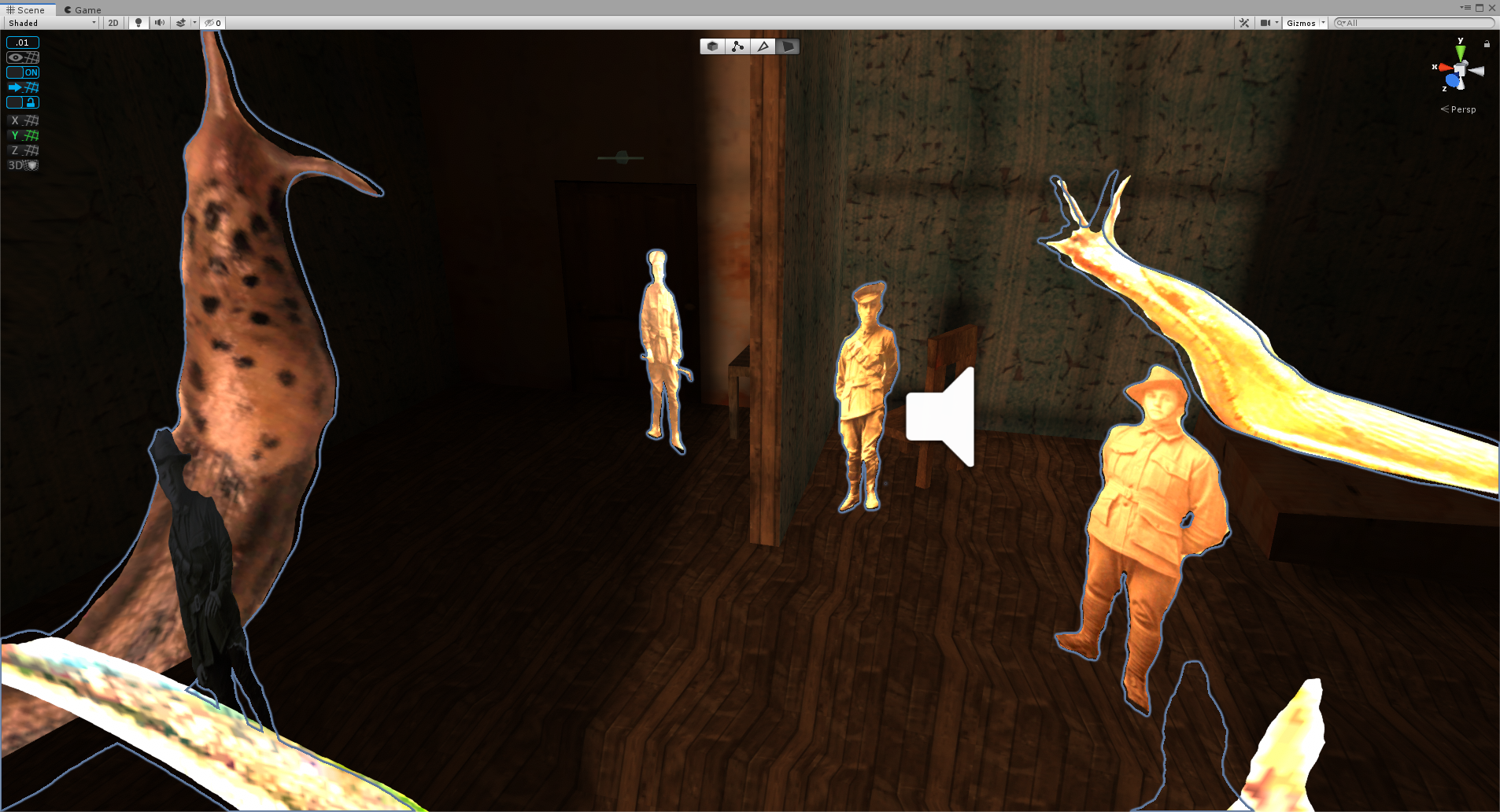 Grateful for the critics

From where I stand at the moment, I'll defend please to the grave. It is the exact experience I wanted to create. Now, people online will always play armchair critic, especially with indie games; there is this bizarre notion that an indie game is automatically an imperfect, incomplete work that needs players' input to get better. Perhaps it has to do with the relative closeness one can feel with a game designer, or the fact that we know it's only one person (or a very small group of people) behind the game, or perhaps even it's the fact that a lot of those small indie games are usually presented as a flawed demo for a dream project that we all know will never come to fruition.

In any case, an indie game (and by that I mean those self-published games such as the ones found on IndieDB, Itch.io and Gamejolt) is automatically perceived as 'never fully done', unless it was published by a higher authority, such as a 'more credible' publisher. And this point of view distracts from possible appreciation of the work itself. It's a shame. Players are preventing themselves from fully enjoying a given indie game because to them it cannot possibly be a complete finished vision.

please was treated as such by a lot of people, even though it is my clearest, best realized vision of a game so far.

And for this I blame Markiplier.

Love the guy, obviously. I am not an avid follower of his channel, but I am subscribed and I can certainly appreciate his content. He played please, bringing the game to the largest spotlight I can imagine, the biggest exposure I ever got for a game (btw, exposure does NOT translate to sales or profit, burst that bubble already, budding game designers, sorry). The reason please  is getting more attention is because the game clearly has the most 'mainstream' appeal out of any other title of my current catalog.  But then again, it's not a mainstream experience...?

It's a game that does away with some conventions of game design. The clearest example of this is the lack of a proper title screen. Instead, the title appears at the very end, and in a very very split-second blink-and-you'll-miss-it final screen. There are ellipses (sudden teleportation from one place to the next) that threw a lot of players off. A vague, subtle scenario. Direct, unreasonable demands to the player to tolerate a high volume level. And so on. I never expected please to reach this large of an audience (it is statistically my biggest success to date) because I don't DO large audiences.

Seeing comments about the game lead to me just strengthening my current position. I am not planning on becoming openly hostile to players, but I am interested more than ever to go further down the path I chose to making each of my games very personal and yet very abstracted. I am motivated to making a next game that is something I personally enjoy, first and foremost. Players be damned (still, I love you, guys!). 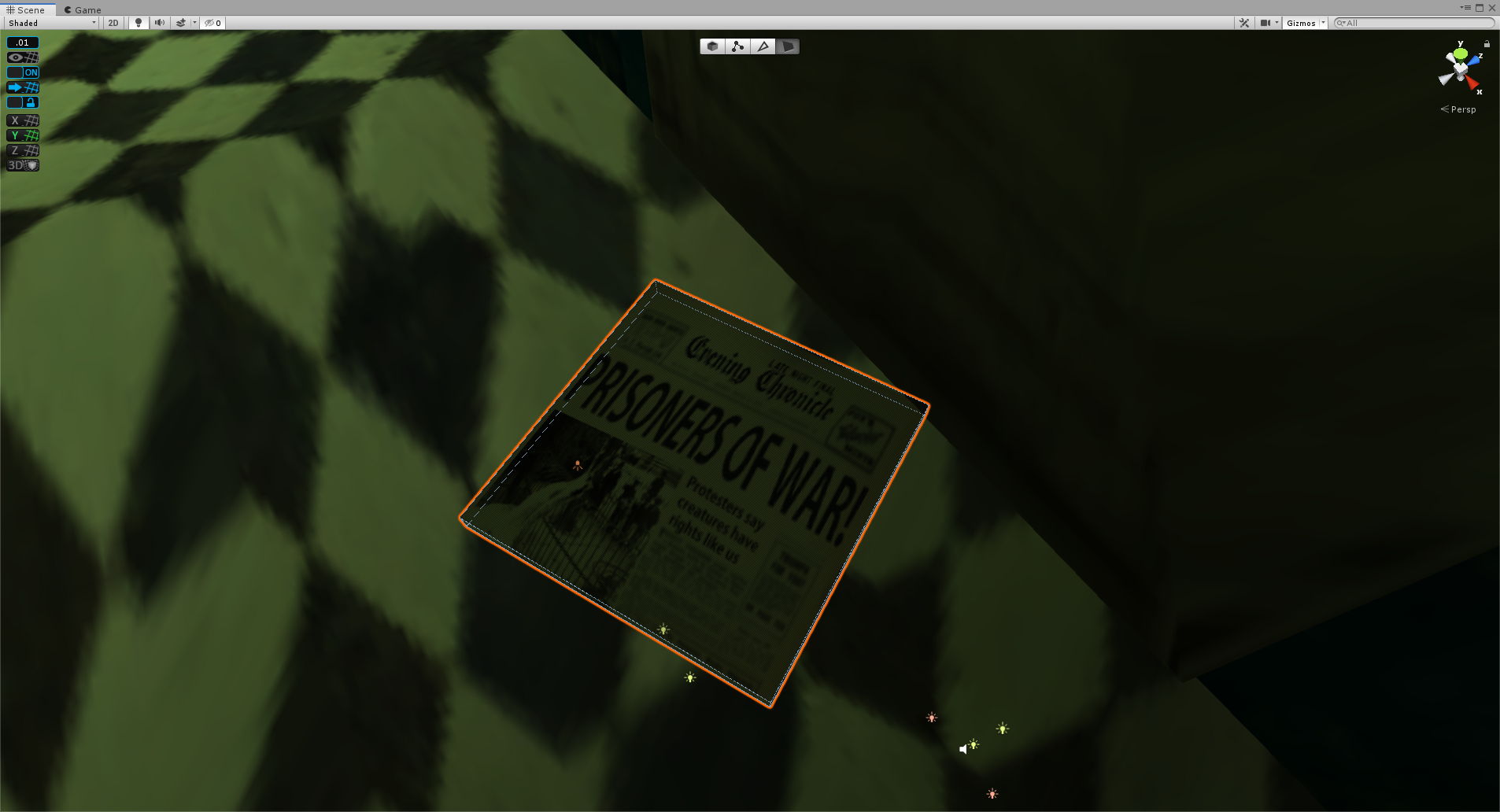 EXTRA! EXTRA! READ ALL ABOUT IT!

Grateful for the lesson in humility

First few drafts of this postmortem were much more bitter than what you read here. I was (still am?) annoyed at some of the comments on the game, suggesting it has a random plot, that I don't know how to subdivide my surfaces to lower texture warping, etc. (To the defense of some critics, I did modify the affine texturing in the main hall of the appartment block environment, because since I got used to it I lost track that it could make some people experience nausea, which was definitely unintended).

I am not meant for the warm sunshine of widespread, mainstream success. I am meant for the cold, clammy shadows of an underground reputation. Join me, it's nice and cool here.

Played all your games (even if I COULDN'T finish "I MAKE SAINTS"), and not a single one of them felt unfinished to me, or not as good as it could've been, I prefered some to others, but even the ones I liked less felt like games, great, complex, finished games. I love your work, please continue to make just want to and what comes naturally to you, because it's great this way, far more good than 90 percent of horror games i played in the past (games made by huge companies included).

Yeah, IMS is a...tougher title, let's say that. It wasn't 100% enjoyable to make either, it's a dark work. Otherwise, thank you for the comment, and while I am way too busy this summer to really concoct anything new, stay tuned this fall for more news and maybe new games!

Reply
Neco The Sergal3 years ago

ayy, just make what you're passionate about, don't think about possible regrets and people will come, and I'll probably play them if it has horror in it :p

Thank you for your support! My work will probably always have some sort of horror element to it, since it's what I dig. Keep on playing and I'll keep on watching!